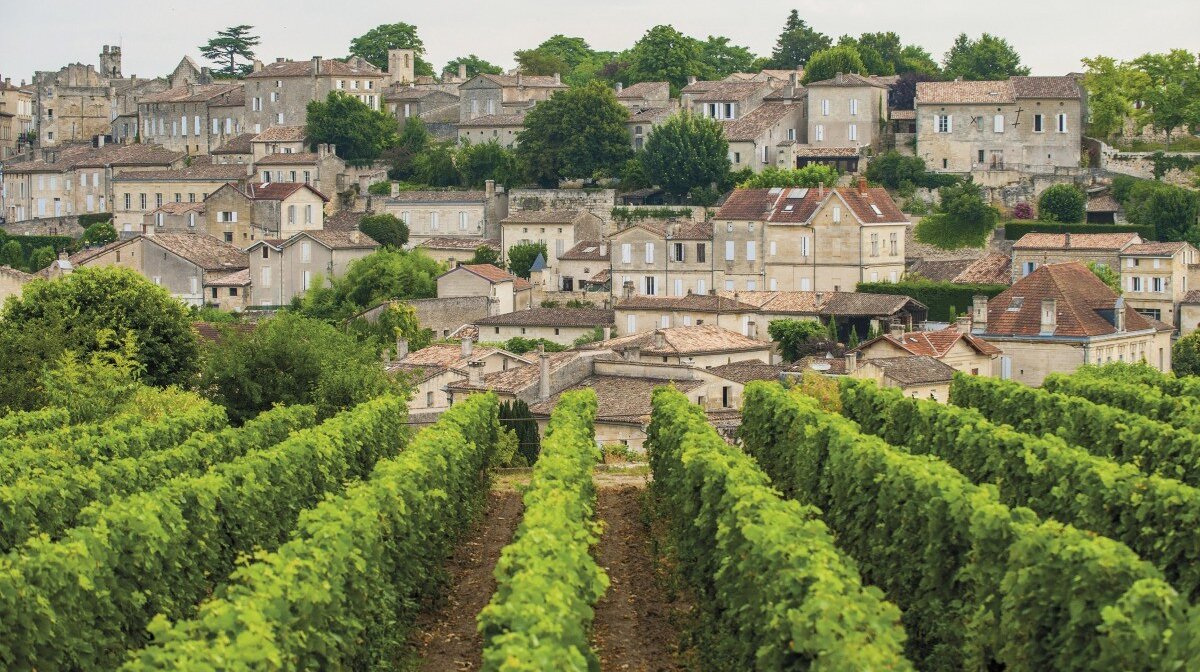 The Bordeaux wine region lies along the rivers Dordogne and Garonne and covers an area of over 120,000 hectares. It is one of the world’s finest wine producing regions, and is where wines such as the rare (and expensive) Petrus are made. Over 85% of the wine produced here is red wine. Bordeaux is also home to the wonderful white dessert wine Sauternes.

This region has been producing wine for centuries as it's soils are perfectly suited to the growing of grapes. Bordeaux wine today has worldwide renown and the region produces nearly a billion bottles appellation-controlled (AOC) wine each year. There are over 50 different appellations within the wider Bordeaux region, produced by over 8,000 growers or châteaux.

Most red Bordeaux wine is made by blending Cabernet Sauvignon, Merlot and Cabernet Franc, In some wines, Petit Verdot is also added. The Cabernet Sauvignon grape gives the wine it’s strong tannin base and black fruits flavours, and also helps the wine to age well. The Merlot grape softens the Cabernet - it’s slightly larger size means there is less tannin. It also imparts a sweeter, red fruits flavour to the wine. The addition of Cabernet Franc gives the final product some complexity and accents of tobacco and violet. The resulting blend of red wine is dry and medium-bodied.  Petit Verdot has an intense colour, is rich in tannins and has a strong aroma. It is used only in small amounts.

The small amount of white produced are made from Sémillon, Sauvignon and Muscadelle grapes. Semillon makes up the majority of the sweet wine, producing a rich, golden wine. It is blended with Sauvignon Blanc which provides a higher sugar content. Muscadelle is used sparingly, and brings floral notes to the party.

The location of many of the vineyards on the river plains means the terroirs are generally gravelly soil which is ideal for planting vines. Cabernet Sauvignon in particular thrives in such soils and forms the backbone of many of the wines from Bordeaux. The vines are protected from the Atlantic by the prolific pine forests on the coast, and the Gulf Stream helps keep the frosts away during the winter months. Unpredictable weather patterns in this part of the world means that growing conditions can be different every year, resulting in unique vintages of varying quality. Outstanding years include the vintages of 1982, 1990, 2000, 2005, 2009 & 2010. In certain years, wines from Medoc can be significantly better than those from other regions (and visa-versa). This is because it is predominantly Cabernet Sauvignon, which tends to ripen later than Merlot. Thus the weather can have a significant effect on the quality of each variety of grape.

The classification of wines derives from the Bordeaux Wine Official Classification of 1855 which ranked the wines in order and has only been updated twice since the original classification. The most prestigious vineyards produce several wines of varying quality. The ‘Grand Vin’ or 'Grand Cru' will use only the best vines grown on the best terroir, and a result a limited number of bottles are produced. They can sell for many thousands of pounds per bottle. The secondary wine can be called a number of things, but is generally the ‘Premier Cru’ version, and can be equally good but just lacking the prestige of it’s Gran Vin counterpart.

Most Bordeaux wine is fermented in stainless steel vats after harvest, after which the wine is transferred to new oak barrels. The wine can spend 20-24 months here before being bottled.

The quality of the wines are regulated and divided into 57 appellations (a quality control system based on locality).

To the north of Bordeaux and west of the Gironde Estuary lies the Medoc wine region. Here you will find the wines of Haut-Medoc, Listrac-Medoc, Margaux, Medoc, Moulis, Pauillac, Saint-Estephe and Saint-Julien. Red wines produced here tend to be rich, aromatic and complex. Cabernet Sauvignon is the dominant grape and as a result, all of these wines benefit from a process of aging.

To the south of Bordeaux  and west of the Garonne river is the Graves region and the Sauternes region. Graves features the Merlot grape as the dominant grape so these wines tend to be lighter than those produced further north. Sauternes produces a wonderful sweet dessert wine, made from Semillon, Sauvignon Blanc and Muscadelle. It has a golden to amber colour and can be left to age for up to 50 years. Other sweet wine appellations such as Barsac and Cerons can also be found here.

In between the rivers of Garonne and Dordogne is a large region of vineyards producing red, white and sweet wine wines. Amongst the appellations are Cadillac, Entre Deux Mers, Loupiac, Sainte-Croix-du-Mont and Sainte-Foy-Bordeaux.

To the north of the Dordogne river, in the area mainly to the east of Libourne you will find mainly red vineyards that include Saint Emillion, Pomerol, Fronsac and Saint-Georges. These red wines have a larger part of Merlot in them, producing smoother yet still elegant wines.

Just as the Dordogne river meets the Gironde Estuary on the north side of the river is the final region of Bordeaux, the home of Blaye and Bourg. Both red and white wines are produced here. The whites are made from Sauvignon Blanc, Semillion, Colombard and Ugni Blanc. They have fresh citrus flavours, yet have some richness (imparted by the Semillon grape) and are best consumed whilst young.

It is likely that the Romans introduced vines to Bordeaux, and thanks to the optimum growing conditions, wine production has been flourishing here ever since. When Henry Plantagenet married Eleanor of Aquitaine in the 12th century, Bordeaux wines began to be exported to England. The style of wine at the time for was pale, almost watery red wines which were termed ‘clairet’ in France. This became known as ‘claret’ in England and this term continues to be used today in English-speaking countries, particularly when a wine producer wants his wine to have an association with the posh nobility of England!

The first region to be cultivated for vineyards was Graves. This was followed by Medoc, which was marshland before being drained in the 17th century. As the number of vineyards grew (referred to as Chateaux even if they were modest farmhouses), some wine producers began to stand out from the crowd. The classification system was introduced in 1855 at the request of Napoleon III, which ranked wines from Medoc and Graves into an order of quality. The Premier Cru (first growth) consists of Chateau Lafite Rothschild, Chateau Margaux, Chateau Latour, Chateau Haut-Brion and Chateau Mouton Rothschild. It should be noted that Pomerol does not have a classification, despite including notable wines such as Chateau Petrus.

In the late 19th century, a Phylloxera invasion destroyed most of the vines. The industry was saved by grafting native vines on to American rootstock, which had evolved to produce a sap that repelled the insects.

Chateau Petrus must be up there with the world's most famous wines. It is produced in the Pommerol region, which has never been classified in the AOC system. You can easily pay thousands of pounds even for the lesser vintages. It is a predominantly Merlot wine and is rich and powerful - generally drunk at least 10 years after production.

Chateau Margaux is an ancient vineyard in the Medoc and is generally considered to produce the finest wines in this region. Composed mainly of the Cabernet Sauvignon grape, these wines fall in the Premier Cru classification, and are renowned for their complexity and elegance.

Chateau Latour is another of those wines that you imagine the nobility casually chatting about in their after-dinner reflections. The vineyard is in the Pauillac appellation of the Medoc and produces wine featuring the Cabernet Sauvignon grape. Extreme quality control ensures that only the best grapes are used and this has helped produce excellent vintages over many years. Some Latour vintages can be aged for over 100 years.

Chateau Lafite Rothschild is found in the Pauillac appellation of Medoc and has been producing fine wines for centuries. The original Lafite vineyard was bought by the Rothschild family is 1868. Dominated by the Cabernet Sauvignon grape, it tends to be a softer wine than those produced by neighbouring Latour, with wonderful perfumes and sophistication.

Chateau Mouton Rothschild is found just a few kilometres south of Lafite Rothschild, also in the Pauillac appellation of Medoc. With the cabernet Sauvignon grape forming the backbone of the wine, they tend to be full of black berries aromas, fine tannins, and are more ‘new world’ in style when compared to other classic Bordeaux wines.

Chateau Cheval Blanc is a leading wine producer in St Emillion, and is found on the border with Pomerol. It is unusual in that it’s best known wine is made predominantly with the Cabernet Franc grape. Full bodied, heady and complex, this wine needs to be laid down for at least 10 years before drinking.

Chateau Haut-Brion is found in the Graves region (Pessac Leognan) and has the distinction of having a Premier Cru classification. The red wine has a higher Merlot content than wines from Medoc, making it more rounded, but it also has an earthiness and remains a powerful wine. Seriously good white wine is also made here from Semillon and Sauvignon Blanc, and is often compared to the best white Burgandy.

Chateau Le Pin is the most expensive wine in the world right now. There is only 5 acres of poor-yielding vineyard in the Pommerol region, which produces 600-700 cases of wine each year. The wine is mainly Merlot with a small touch of Cabernet Franc, and is intense, rich and fruity.

Finally, a pink sparkling wine is also produced in Bordeaux. Known as Crement de Bordeaux, this bubbly is more complex than most rose, and has a red berry aroma. 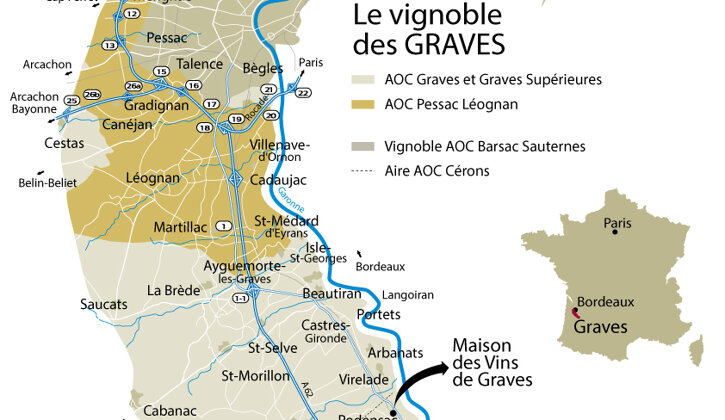 Historic region to the south of the city of Bordeaux 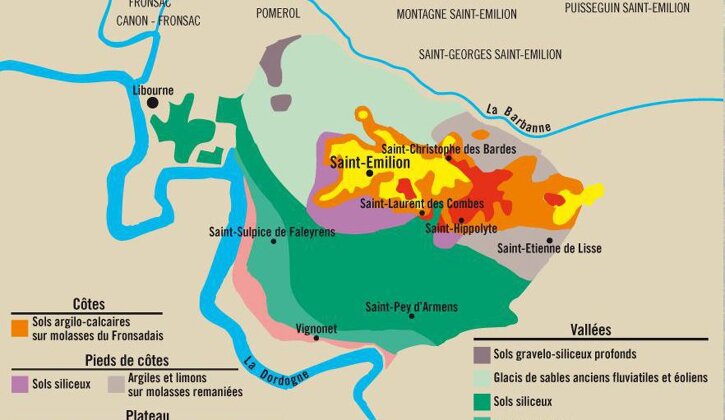 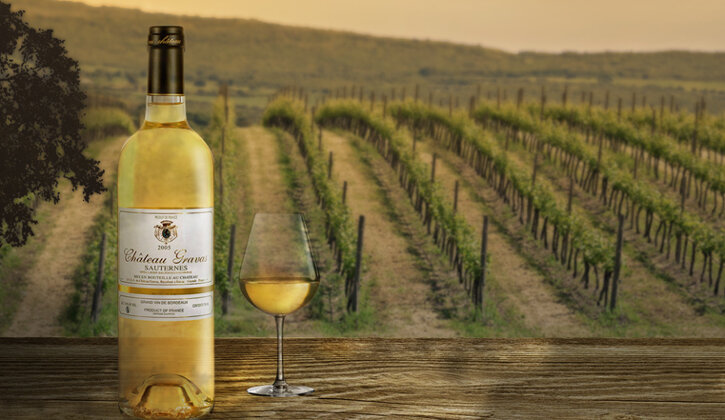 Famous for it's dessert wine 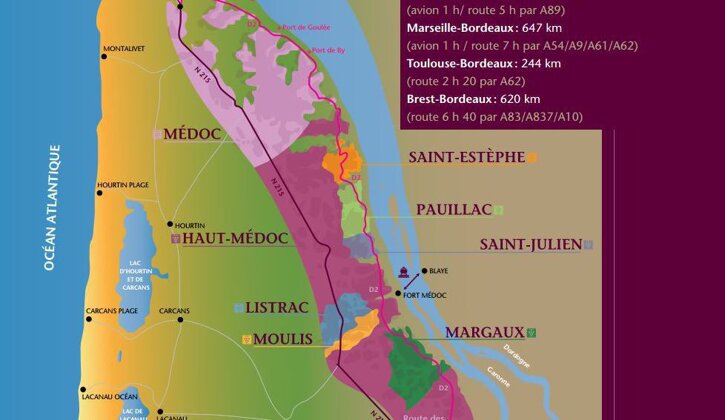 Home to some of world's most famous estates

The Wines of Medoc